The Prana of Profanity

Posted by Suzanne on February 9, 2016 in Practice

I’m not sure where I come down on the issue of profanity and yoga.  On one hand, the use of profanity can display a lack of mastery of the English language, (something my mother would say).  On the other hand, (if I’ve learned anything from my father, the sailor, it’s that) a well placed f-bomb can create quite an impact.  So, what’s a yogi to do?

The first time a yoga teacher swore in class it was actually refreshing.  I had just completed teacher training, which was full of intense study and discussion and was attending a weekend workshop with a very experienced guest teacher.  Almost overwhelmed with everything we had attempted to learn and the abyss of additional study in front of me, it is safe to say that I was feeling a bit in awe and overrun.  Somehow her casual use of language, which included profanity, seemed to tear down the veil of the teaching and the teacher/student chasm.  Moving away from Sanskrit and seriousness made the philosophy and the teacher more accessible. 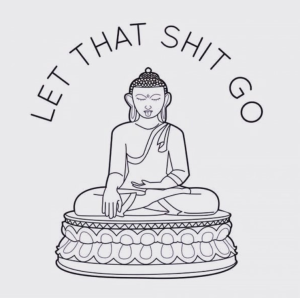 Since that time, over five years ago, there’s been a proliferation of profanity in yoga.  It used to be very rare that a taboo word would show up in a class, on a playlist, or social media, but now it seems to be a regular occurrence.  Has it gone too far?

On the plus side, swearing can help burn through negative energy.  A vocal Durga-esque blast can help to remove negative festering energy, or motivate a blockage of energy, making space and clearing the way for good things.  Some times destruction and clearing is necessary before rebuilding

On the negative side, profanity can have a very negative, hateful vibe.  That goes against the core teachings of creating union and harnessing life force or Prana.  More often than not, it’s just being thrown out there in order to shock or from a lackadaisical attitude.  None of these scenarios promote life, love, or give energy.

I think the answer depends on intention and frequency of use.  Are words chosen wisely (even a well placed f-bomb), or are they just filling space.  Like anything else, if it is done mindfully, it can have a positive impact.  If not, it is just the act of sharing and proliferating verbal pollution.

So has it gone to far?  Does profanity have a place in yoga?  It’s something that each of us can choose.  The answer for me is mindfulness, if I am thoughtful in the way I choose my words, then I can use them to create, enhance, and harness Prana.

“Before you speak, think – Is it necessary? Is it true?  Is it kind?  Will it hurt anyone? Will it improve the silence? -Sri Sathya Sai Baba

I will definitely think twice about the words that I choose.  Will your words promote Prana?

2 comments on “The Prana of Profanity”